Lee Seung-Jae is a major character and a 1st year JJANG. He is also Ju Ingong's childhood friend, and one of the antagonists of season 2.

Since Lee Seung-Jae was bullied as a child he hates it when anyone looks down on him. Lee Seung-Jae was held back a year so he is also quick to anger when someone misinterprets his age. It appears as though he is a chain smoker since he can usually be seen smoking almost whenever he is not fighting.

Lee Seung-Jae has long grey hair wrapped in a ponytail and red eyes. He wears the standard school uniform but unlike most JJANGS his is unaltered. He also wears a gold pendant around his neck.

Later in life, after he was separated from Ju Ingong, Lee Seung-Jae was being bullied again when Kang Changwon appeared before him and showed him true strength. Since then, Lee Seung-Jae has become Kang Changwon's underling and grown strong underneath him. 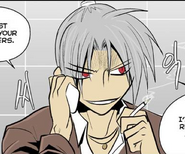 Lee Seung-Jae as a child. 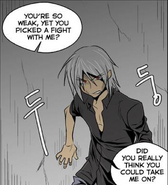 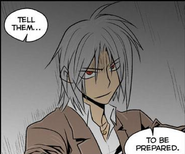 Lee when Kang's plan is set in motion.

Lee seung Jae hits Ingyu Hwang from behind.
Add a photo to this gallery
Retrieved from "https://transferstudentstormbringer.fandom.com/wiki/Lee_seung-Jae?oldid=4199"
Community content is available under CC-BY-SA unless otherwise noted.