Lee Sanggil is a character in the series and a first year JJANG.

Lee hates taking orders from the 2nd year JJANG's, who seem to not have the slightest ounce of respect for him. Though he may hate obeying the older JJANG's, he fears them greatly. He appears to be good friends with Park Changsoon, a fellow 1st year JJANG. The two are rarely seen apart. After he is defeated by Lee seung-Jae it appears as though the three have developed a form of friendship, as they are seen hanging out.

Lee has light-blue spiky hair and light-blue eyes. He wears a brown jacket with a black undershirt. 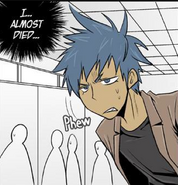 Lee Sanggil leading the other freshmen's.

Add a photo to this gallery
Retrieved from "https://transferstudentstormbringer.fandom.com/wiki/Lee_Sanggil?oldid=4161"
Community content is available under CC-BY-SA unless otherwise noted.