Kang Changwon is a major character in the series and the primary antagonist of season 2.

Kang is a man shrouded with mystery. He is always smiling, which belies his likely malevolent intentions. He seems to have an interest in Yung-hee Lee.

Kang has shaggy white hair covering his eyes which appear to also be white. He wears a gray jacket with no shirt and has blue pants, but this also constantly changes during the story.

Kang Changwon and Don-min Ahn may have gone to the same middle school, as the two seem to know one another and are seen in a photo with Yung-hee Lee. At one point in time, Kang Changwon was weak, but his friend Don-min Ahn protected him. Kang grew to desire his own strength, and it is hinted that he eventually thoroughly defeated Don-min Ahn. The two are no longer friends, and Don-min Ahn tries to protect Yung-hee Lee from Kang by placing Yung-hee in Ju Ingong's care.

Two years prior the series, Kang Changwon offered Lee Seung-Jae the opportunity to become his servant after saving him from bullies, because he liked the look in his eyes and his desire for strength despite his weakness. Lee jumped at the chance to gain power like his and is now Kang's underling. 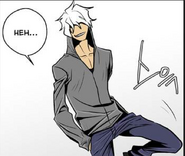 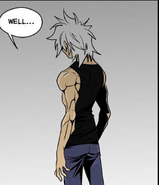 Kang when is plan is set in motion.

Choi Wansuh struggling after being hit by Kang Changwon.
Add a photo to this gallery
Retrieved from "https://transferstudentstormbringer.fandom.com/wiki/Kang_Changwon?oldid=4207"
Community content is available under CC-BY-SA unless otherwise noted.