Ingyu Hwang is a major character and a JJANG.

Ingyu Hwang highly regards strength as a respectable trait and praises anyone who can pose a challenge to him. Strangely, Ingyu Hwang openly admits to having anger issues, a trait not common among people who do. Although Ingyu Hwang is strong he is not stupid as he knows when he has reached his limits and accepts it. He even developed a plan to conquer the school.

Ingyu Hwang has shoulder-length spiky brown hair. He is muscular and extremely tall and appears to be much older than he actually is. He usually wears the schools gym outfit which consist of a black v neck and pants. 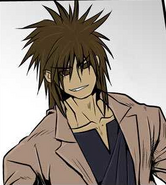 Dae-yong kim and Ingyu Hwang in reboot.
Add a photo to this gallery
Retrieved from "https://transferstudentstormbringer.fandom.com/wiki/Ingyu_Hwang?oldid=4293"
Community content is available under CC-BY-SA unless otherwise noted.