Don-min Ahn is a major character in the series and the strongest of the schools JJANG's.

Don-min Ahn is a very cheerful and upbeat character, although years before the start of the series he was a cold and ruthless fighter. He is respsected by all the JJANG's and treats them all as friends.

He Kang Changwon, and Yung-hee Lee have known each other for a long time. However it appears that him and Kang Changwon are no longer friends since he gets angry at the mention of Kang's name. 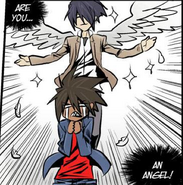 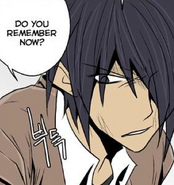 Don-min Ahn show's his ruthless side.

Don-min Ahn's photograph of his past. 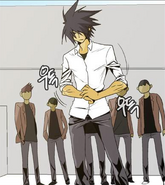 Young Don-min Ahn injured in his fight with Kang Changwon.
Add a photo to this gallery
Retrieved from "https://transferstudentstormbringer.fandom.com/wiki/Don-min_Ahn?oldid=4291"
Community content is available under CC-BY-SA unless otherwise noted.