Choi Wansuh is one of Ju Ingong's best friends and one of the school's Jjangs.

In the beginning of the series Choi Wansuh seemed very prideful and confident in his skills. He even went as far as to challenge an upper JJANG who insulted his strength. As the series goes on he becomes a comic relief character. This happens around the time his nose is broken. In fact he even begins to appear as a chibi regularly. He strongly admires Ju Ingong and thinks of him as a good friend.

Choi Wansuh is the first student that Ju Ingong meets and his first opponent. He imediatly challange's him to a fight and surrounds him with his men. Ju Ingong intimidates all of them to where there to afraid to fight. Choi Wansuh however decides to hit him as he walks away. Ju Ingong trips and accidentally avoids Choi Wansuh's kick, fooling them all into thinking he is strong. Dae-yong Kim then enters his class and begins to insult Choi Wansuh. Choi suh gets angered by his insults and punches Dae-yong Kim. The two then proceed to fight, the fight however is left undecided as Choi Wansuh begins to attack Ju Ingong out of anger.

After Ju Ingong accidentally knees him in the nose in chapter 5, since then, Choi Wansuh is seen with a patch on his nose, starting from chapter 8. 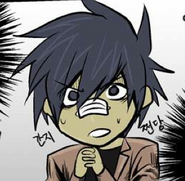 Wan Suh in his chibi form

Wan Suh before his broken nose 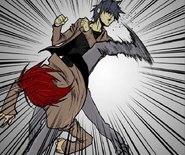 Choi vs Dae-yong Kim in Reboot 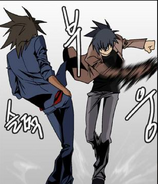 Add a photo to this gallery
Retrieved from "https://transferstudentstormbringer.fandom.com/wiki/Choi_Wansuh?oldid=4284"
Community content is available under CC-BY-SA unless otherwise noted.